The Botfly is an unknown being that Bina is working to defeat. The Botfly is considered to be evil, despite having never directly spoken to any characters (aside from Bina, though this was during a dream where the Botfly assumed the form of Lash). The Botfly has the mysterious ability to impart 'gifts' when a character looks directly at it. These gifts are supposedly the viewer's greatest desire or deepest wish at the time.[ref n]It has been known to hypnotize, coerce and otherwise persuade others to do its bidding.

The Botfly resides outside of time. This can be derived from the fact that both Bina and Kendra imply that the Botfly is 'below' them when they time-travel by breaking through the Cracks in Space-Time. The Botfly also appears to manifest in a frozen moment at the Astre Sucre Factory, similar to the Moment which was created by B3. This has been referred to as "The Other Moment," and it is where Bina first encounters the Botfly.

Each person sees the Botfly differently when not directly focusing on it.[speculation?] Bina sees a television when she first glances at it, and upon focusing her attention she continues to see a television, as well as green tendrils extending from it. Many people agree that the green light emitted by the Botfly is "pretty" or otherwise pleasant to look at.

Gregor- summoning the Hound and Naughts, based on his desire to bring back his dog Piotyr from the dead

Josephine- Free electricity when people observe a symbolic representation of the Botfly, based on her desire to be a famous scientist

Amie- Makes reality more like an episode of Doctor Who, based on her being a Doctor Who fangirl 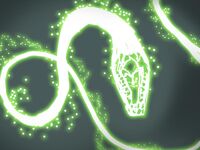 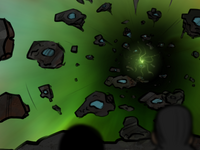 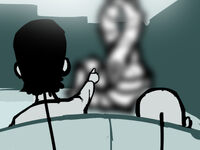 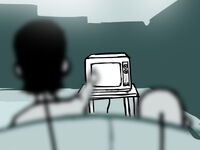 Bina sees the botfly first as a tv 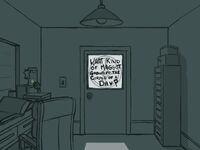 Retrieved from "https://all-night-laundry.fandom.com/wiki/The_Botfly?oldid=1079"
Community content is available under CC-BY-SA unless otherwise noted.